discussions about deephost’s extensions are not allowed in this forum

I have misunderstood something then, I have deleted my post.

Deephost extensions did not working properly. Sometimes it working and sometimes it crashes

I tried every possible extension for UPI and every method that I can found. None of them worked properly
In everycase some apps worked and some don’t. What you can do is, restrict the apps which doesn’t work OR only allow apps which works with the method you use.

In my case no one upi app worked goole pay, paytm, airtel jio, bhim and phone pe these not working in my case so what i do restrict these apps?

u need to add your business upi id

i do restrict these apps?

if you are using a normal upi id then nothing will work. You should know that government changed UPI rules so from now on, only business UPI id will work (that’s also not working properly)
you can get business upi from google pay or phonepe

Description This extension is used to pay using UPI Payment Picture of all the blocks [image] Download link here com.AK_Tech.UpiPayment.aix (39.8 KB) Note : pls use screen error occurred event to catch error Hope you like it… if you like it don’t forget to

maybe sometimes it does not catch it?

Right it always show status cancelled. Whatever transaction success or fail it doesn’t matter it show only cancelled 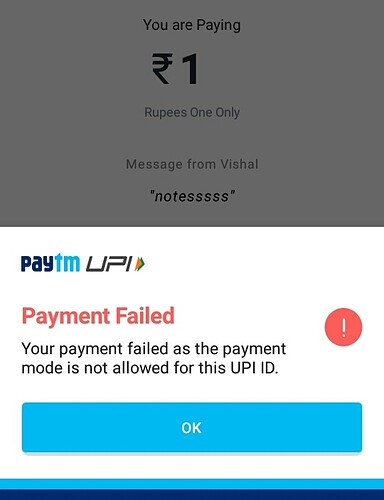 Why I am seeing this when using deephost UPI extension.

Posts about Deephost Extensions are not allowed here, just because the author does not provide any help anymore. I suggest you to talk to the author directly.

Ok I talk with the author