This is purely a beginner’s tutorial.

I will show the things you can do with the different text blocks.

This is a textstring block

Default it is empty but you can fill it with a lot of different things. Some samples you can find below. 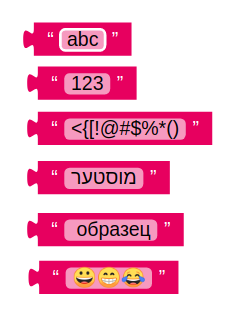 The Text string block is one of most used blocks in a lot of projects. Here are some samples. 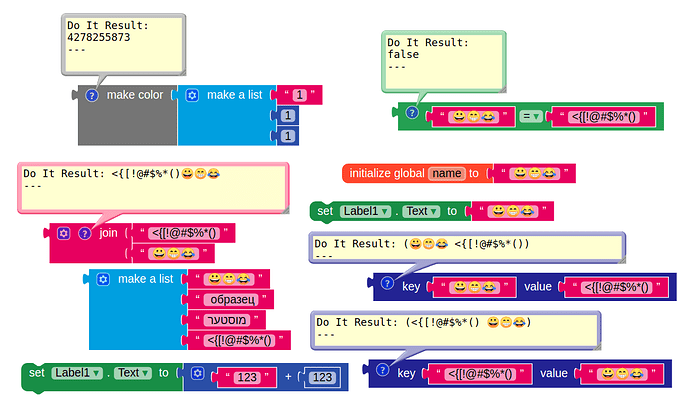 You don’t have to understand what every block means. It is just to show you how Text string blocks can be used.

When a Text string block is filled with a number it acts the same as a number block with the same value. Number blocks will be discussed in a different Beginners guide.

A space in a Textstring block also takes up space.

Below you can see different Text string blocks with spaces inside of them.

The first and second Text string blocks look the same. The first one is empty and the second contains 1 space character.

The other Text string blocks contain respectively 2,3,4 and 5 spaces.

This a Join block

With it you can join other text, variables, calculation results, etc, etc and display it for instance in a label.

Some samples of the use of the Join block you can see here.

By default you get a Join block with two sockets. If you want more you can use the white gear symbol in the little blue square on the top left of the Join block.

You can use the white gear symbol to add but also to remove sockets.

So you could end up with a Join block looking like this. But this Join block just displays the Text string block that is behind it and nothing further. 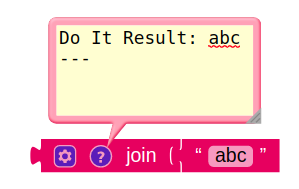 This is the Length block

It returns the number of characters in the blok that is attached to it. 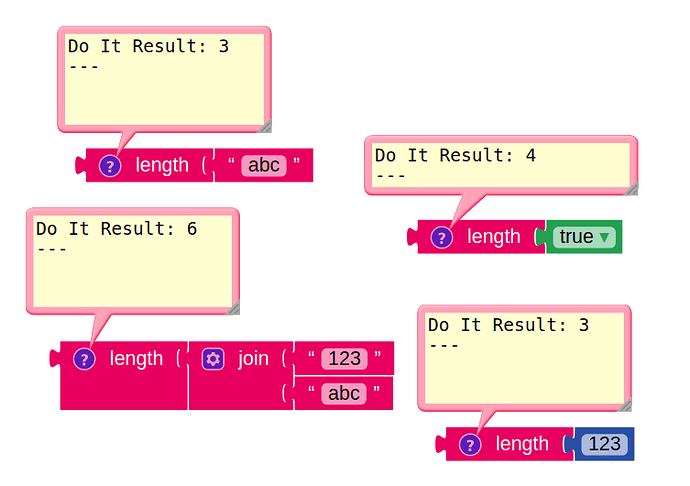 This is the is Empty block

It will detect if the attached blocks are empty.

Some samples how you can use it.

The first result is false since the Text string block contains characters.

The second result is true since the Text string block is empty.

The third result is false since the Text string block contains a space character.

This is the is string block

With this block you can test if the block that is connected to it contains a string. For example. 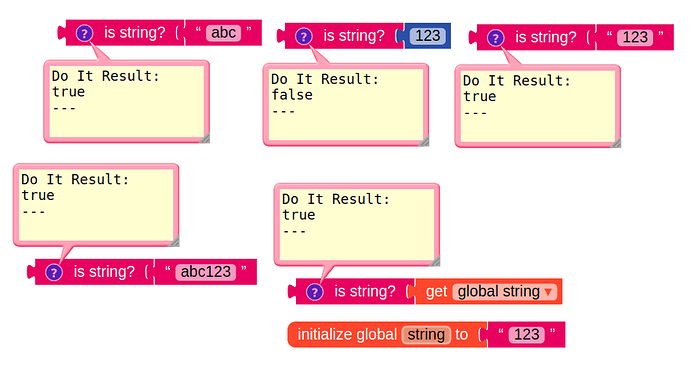 This is the compare texts block

To show this in examples.

This is the trim block

It removes all spaces from the beginning and end of a string. The below Text string block contains a string with 5 spaces in the front and 5 spaces at the end.

When you add the trim block and execute it.

You get the following result. 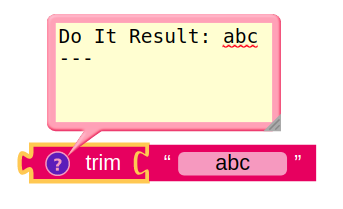 You can see all spaces are removed.

this is the make UPPERCASE or lowercase block

It has two options.

It works like this. You connect a string and it converts it to either UPPERCASE or lowercase. 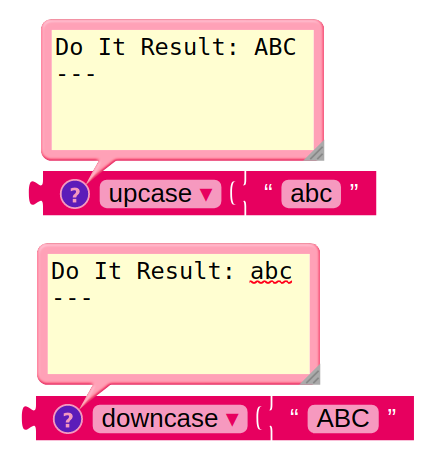 This is the start at text block.

It shows on what position in the string the text start that you are looking for. 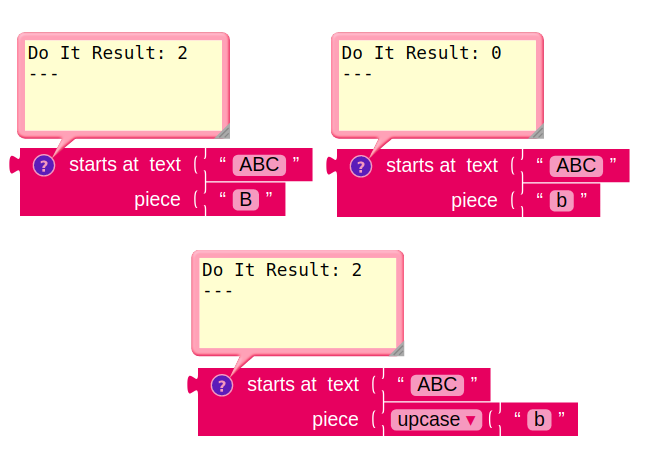 The last example show the combination of the start at text block and the upcase block. 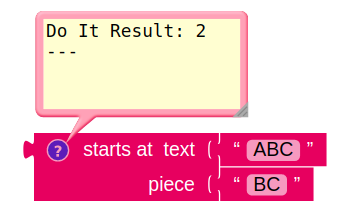 This is the contains text block

It gives a true or false if the piece of text you want to find is or is not in the text you are searching. 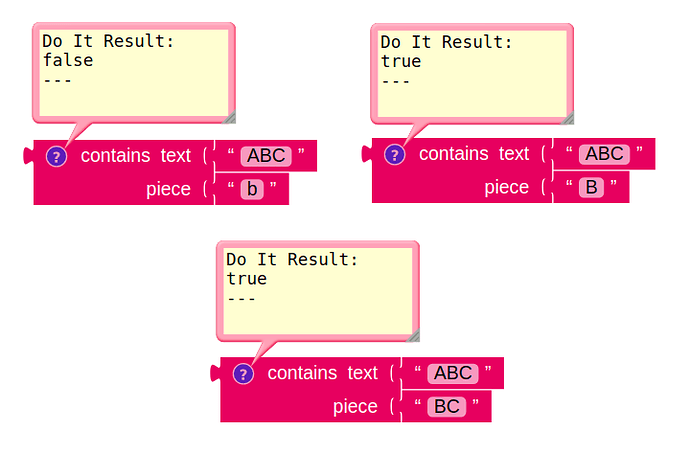 This is the split text block

Using the dropdown menu you can see it has 4 different options. 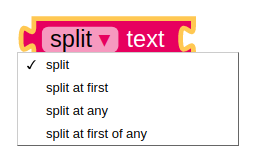 You can see what the result is. I will now use a block from the Lists category.

The split blocks generates a list in this case ( a b c)
When you want to pick the first item of that list you use the blue list block as shown.

You can split a word and put it in a list by putting an empty text string block.

The empty-string is something that has to do with the way Kodular is made and is related to java as far as i know. This has the following result when you want to call items in the list you generated.

This blocks splits a string at the first occurence of a certain character. In the example the character “,” is used. 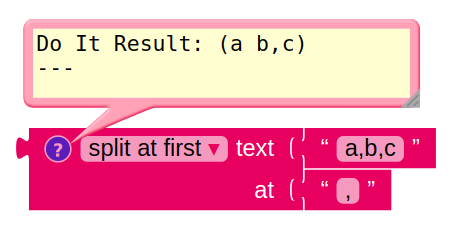 The textstring is split at the first “,”. So you get a list with one item “a”, and a second item “b,c”. The character that is used to split the string is omitted from the result.

With this block you can split a string with a number of different strings. In previous split blocks you were always limited to one split string. Now you can use multiple. The split strings are put in a make list block.

In the example below the string is split with the use of the character “,” and “|”.
You can see the result.

split at first of any

With this block you split a string in two at the first occurrence of one of the provided split strings that are in the make list block.

In the sample above you can see that the ", " character is the first one to be found so it is split.

You get a list that has two items. The first one is “a”, the second one “b,c,|d|e|f”.
The character that is used to split the string is omitted from the result.

This is the split at spaces block

It lets you split a textstring where the items are divided by spaces. The items are placed in a list.

The same thing can be done with these blocks. The Text string lock connected at the make a list block contains a space character.

This is the segment text block

When this block you can get a segment of a string. You have to set a starting point and how long the segment should be. 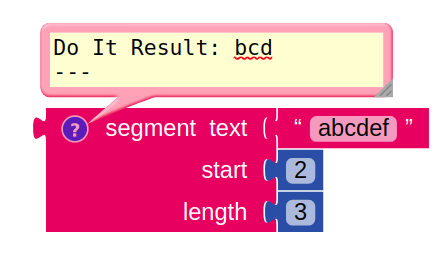 If the length number exceeds the length of the string that is tested you will get an error message. At least you get one in the companion.

This is the replace all text block 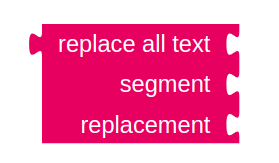 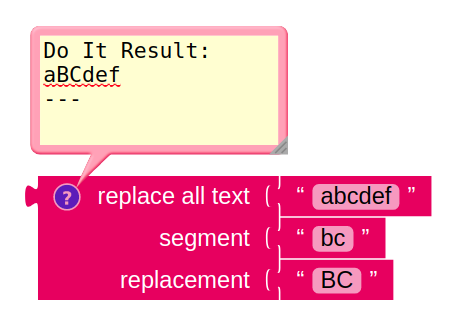 This is the obfuscated text block

Produces text, like a text block. The difference is that th etext is not easily discoverable by examining the app’s contents. Use this when creating apps to distribute that include confidential information, for example, API keys.

Warning: This provides only very low security against expert adversaries.

This is the reverse block

This block reverses the string you attach to it. 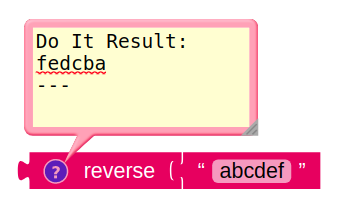 This is the replace all mappings block.

This is a bit hard to explain. You have to use dictionary blocks with it.

With it you can replace text in a string using dictionary blocks.

You have two options when you click the dropdown menu.

If the dictionary order is specified, in the case of one key entry being a substring of another key entry, the first one to be replaced is based on the entry order in the dictionary (the earliest one gets replaced first).

In short: replace by element order in dictionary

If the longest string order is specified, in the case of one key entry being a substring of another key entry, the first one to be replaced is the one which is longer.

In short: replace longest first, then replace the shorter substrings in order of string length

53 Likes
Is there anyone who have tried all the components available in kodular?
Remove spaces and special characters
Parentheses in label text
Segment: Start is less than 1 (0)
Dose it possible to replace any word at space?
How to know if a link in a text?
Parsing string to variables
Please help about Decimal time to Normal time
Help with JSON : how to get a value?
Small letter or capital letter
Exegesis I searched but got no answer
Small letter or capital letter
Unquote the word
How to get last number?
I calculate in excel lead to logic blocks
How to make No. like xxxxxx9999 in OTP Page?
Cut everything after the name
Return letters from string
Help me with text
How to detect if json array is list?
How do I cut a certain amount of parts from a link?
Remove special character json kodular
I want to split words
How to make this model textbox count input character in label
I need only the file name to be seen
How to get real file path from URI
Check some text
How do I particularly separate email from paragraph?
Simple call to find any words listed, from the string
How to identify the text of a label
Selection a word from text label
themaayur (Mayur Berad) 5 June 2020 07:48 #2

Good and beautiful tutorial. I hope this is just the beginning.

Added some more blocks. Wanting to do this for a long time. Happy that I started and it is fun to do.

Peter’s guide is better than docs for beginners

All textblocks are in the Beginner’s guide. Tell me what you think? Are there errors that i should fix?

great guide, which additionally shows how important it is to use the Do it feature,
see also tip 4 here App Inventor: How to Learn | Pura Vida Apps
see also Live Development, Testing, and Debugging Tools

It has to options.

One correction here, should be two

Maybe it was an error on my side. OP of last post didn’t do anything wrong.

It is certainly being one of the best tutorials! Congratulations !

Really nice post @Peter, it was so detailed and informative. In the end I was looking is there anything else because the whole topic was so interesting.

Thanks for your efforts.

Really today I learned a lot about this guide.

Using replace mapping preferring dictionary order, if some of the text doesn’t exist in dictionary, what would it returns?

Maybe you can test that and show the result here.

Definitely! Will do it when available

How to remove a segment from a text starts from word :one" … to word “three” in a text like this:
“one two three four five six”
To get
“four five six”

You can use devices utilities parse method.

It might works. If not, you can join some special characters after the text and type the characters to the “ends” parameter.

You could use the split text at block

. Plug in three. It will result in a list.

with index 2 to get 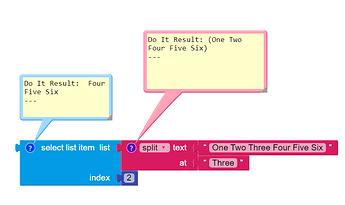 How do I get just a certain amount of letters?

Example: I have a list with 5 names, each name contains 15 letters, then I just want you to show 6 letters and then the three points.

How is it:
Real Estate