Is there a audio file converter extension?

It’s very easy and simple can be done without extension

As you may know, I once created a TextToWav extension. I checked your extension, and it creates also just a wav file like mine, just with the ending .mp3. You can check this in any audio editor. Or you can just rename it to .wav and you will see it will work. Hint: When you want to create a mp3 file you need a library which is very big (e.g. lame library) because Android doesn’t support encoding to mp3 yet.

Maybe if its not supported, Another idea would be to rename file and replace the extension in the file name from “.wav” to “.mp3”

Another idea would be to rename file and replace the extension in the file name from “.wav” to “.mp3”

As already suggested by @Django_s_Android_App.

Maybe if its not supported, Another idea would be to rename file and replace the extension in the file name from “.wav” to “.mp3”

Yes this my way I also tried this and it worked

That is incorrect. Then you have been fooled by the Windows Media Player. Because the media player recognizes the file Container as it is native. You can name the extension as .doc and it will be still recognized as mp3. Wav mp3 or ogg files are completely different. Just Google for it. But as a I can see, you all in all didn’t read the link @Anke posted.

But back to the initial question.
@AtomDeveloper once made in extension for me to convert WAV files into mp3 using the lame library. I paid him for this. He never released that Extension official. Maybe you want to ask him. It was some tricky to implement in an App, you will need to edit the apk with apk editor and will have to insert the lame library manually. This makes the app about 20mb bigger. To answer the next question: No, won’t share that extension or an demo apk

But maybe you want to use ogg files instead of MP3. In this case I once made an extension for this . just search The Forum

There are several simple ways to do that on javascript… 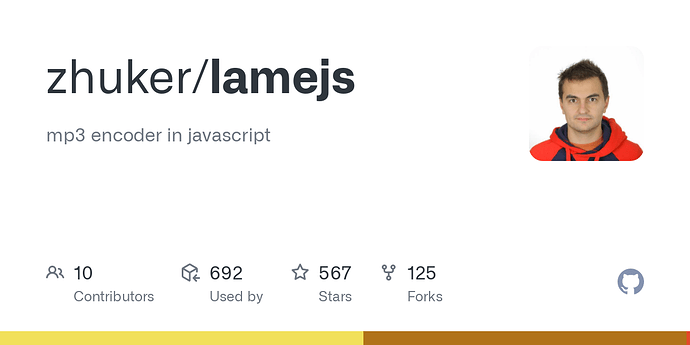 mp3 encoder in javascript. Contribute to zhuker/lamejs development by creating an account on GitHub.

But it Don’t work if you do not load the code from an http server on your mobile, which was impossible to find as an ai2 extension…

There are also simple ways to fly to alpha centauri but we currently have no spacecraft to do the job.