Hello, why does kodular become very slow when the size of the app grows? It is almost impossible to work on the project of how slow the design part as well as the block part goes. Is there a way to fix it?

You have to give more info to give you a answer. What is the size of your aia, do you use many screen, large assets, etc, etc. See the above topic.

While it’s all right, working all on one screen, with lots of arrangements and lots of blocks, makes Kodular and all the other appinvector-based tools really let down. When you start to feel slow it is time to create another screen.
One thing that could help a lot is these implementations I proposed.
Vote on my proposals and help us achieve that!

Friends App Inventor based platforms are really wonderful, they allow us to build apps without worrying about the boring stuff of APP development. But as the project grows, some things get in the way of the workflow. I will present three solutions that would help a lot. 1 - Possibility to create folders in assets to organize and find more quickly what we want. 2 - Create tabs in the blocks, allowing us to separate our programming, making life much easier. 3 - Possibility to use multi displa…

It helps in the slowness of the blocks, but does not solve the slowness and constant errors of the companion.
Collapsing and opening blocks when we have too many is so boring and so disruptive to the workflow that you want to quit.

when we have too many

I guess maybe you answered your own question. Maybe the way you programm is causing the error.

Don't repeat yourself (DRY, or sometimes do not repeat yourself) is a principle of software development aimed at reducing repetition of software patterns, replacing it with abstractions or using data normalization to avoid redundancy. The DRY principle is stated as "Every piece of knowledge must have a single, unambiguous, authoritative representation within a system". The principle has been formulated by Andy Hunt and Dave Thomas in their book The Pragmatic Programmer. They apply it quite broad...

And you still didn’t give any info about your app itself.

In my case I have many because they are really necessary, and trying to avoid creating new screens requires even more.

Agreed with @Peter . There might be some updates that can be applied to reduce blocks / screens.
Are each screens unique in design? How many screens?

Which browser are you using?

Which browser are you using

Neither does this help 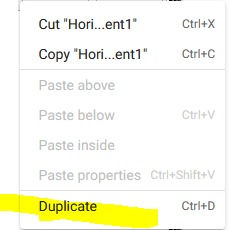 As this function is misused and lately people are using it to much, they think they can duplicate stuff 500 times and still get god working flow

Can only say good luck

I asked only because I had speed issues with Internet Explorer so I started using Chrome.
I also very recently tried Firefox and it was even faster than Chrome.

I also very recently tried Firefox and it was even faster than Chrome.

Yes Firefox works best for me to however, even I experienced some performance issues with some aia’s posted in the community which contained 500+ components and 10000+ blocks

Regarding browsers, when I work from Linux I use Chrome and when I am on Mac I use Firefox. In both systems and browsers it goes the same way.

Hi, thanks for the answers I give a little more information about my project. It currently has 24 screens and some more are still missing. The simple act of logging in to kodular and entering the project is already hell. The bulk of the programming is in operation and I have them contracted. At the beginning the part of the blocks began to go slow but it is that it also affects the slowness of the design part and it is becoming increasingly difficult to work. The project is quite extensive but I did not think that the system would collapse in such a way … perhaps kodular or the app-based systems inventor only serve for small projects?

Greetings and thank you.

What is the size of your aia, do you use many screen, large assets, etc, etc.

You still didn’t answer these questions. And number of blocks.

It currently has 24 screens and some more are still missing.

perhaps kodular or the app-based systems inventor only serve for small projects?

no, but you have to follow the recommendations, see also tip 1 here

Regardless of the BIG MISTAKE of having more than 10 screens (No app needs more than ten screens, and I challenge anyone to prove me wrong), the blocks editor is actually faulty and starts lagging in some systems more than in others. May be is it optimized for Intel architecture more than AMD? I have an AMD processor.

When I use Chrome with more than 1500 blocks it’s almost impossible to move anything, it takes around 2 to 3 seconds to start dragging a block or pan the work area. In Firefox, the same projects moves a lot faster, still with some lag but way better than Chrome.

In Chrome, the login is done lightning fast, while in Firefox trying to login is a matter of luck. Sometimes the screen goes blank, sometimes it keeps asking for my Google account many times, and sometimes it works fast.

But overall, the biggest thing that discourages me and I’m sure other people of making big apps is the lag in the blocks editor. I’m sure there must be a way to optimize it for large projects, My computer is powerful enough to play new games in high quality setting, so I don’t think that has something to do with it.