Text to speech doesn't work in other language

Hi, the “text to speech” doesn’t work for french or other languages.
I searched a lot but couldn’t find anything. Is there no solution to make text to speech in another language than English ?
Thanks for your help

I use that component in spanish without problems.

Thanks for your reply, but it doesn’t help me. I use the same component and tried to make speak a text from a text text box in spanish, german, french : always the English language works.
Does anybody have a solution ?
Thank you in advance

tou can set the language from properties: 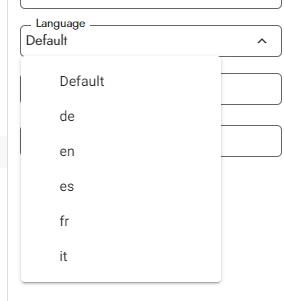 Those are the languages avalaibles

Then you set the message and do the magic

Hi Thanks a lot Felipe.

I did the same as you with a text string, but still speaking with english accent, so it doesnt’ speak properly french. 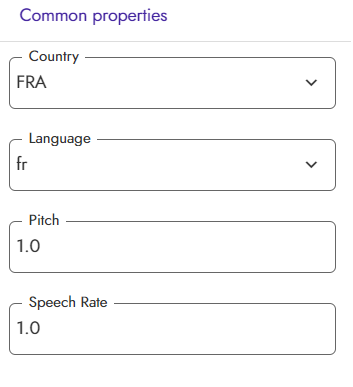 Do have I have to change something with activity starter for example ?

Thanks a lot again

No. I tested with my phone and it worked fine, so maybe your phone is the problem. Tested on spanish with spanish accent, and french with french accent

My phone is fine. I am using Kodular, not App Inventor. Is there something to set up ?
Thanks a lot if you can help me to solve this problem

no. i tested on kodular without problems. try with a diferent phone

My phone is new, and I won’t buy another. But nice to know it works on yours. I won’t use this component as there is no way to solve my problem. Even if I put a text string, the language spoken is not French (or Spanish or German) but a kind of French (or Spanish or German) language which is read by somebody who has never learned French. It would be like me reading spanish even if I do not know anything about this beautiful language : it makes it understable. And this component do not even recognize the number in French and keeps on saying “one”.
Maybe I did something wrong, but I would like to know what. Saying the problem comes from my cell doesn’t help.

Anyway, thanks for your time, Felipe. Maybe you would have find the error if you could directly check what I did.

If somebody experienced the same issue and solved it, please help me, otherwise, I will have to record everything to have a correct native speaker in my app.

I was playing with the component. For a language it’s not that you use, i guess that your phone must download the language, because when i selected new languages, the speach has a delay.

look this video i recorded

well… that’s a proof that the component works!

This app was made in AppyBuilder 100% and uses 5 different languages. It works in many phones I tried it. Can you please try it in the same device and see if it still speaks only English?

Who needs real dice that get's lost all the time? Now you have Simple Dice, the FREE app that lets you roll one, two, three or up to nine dice at the same time! With realistic rolling sounds and animation, the app will say the number in English, Spanish, German, French or Italian! Just press the Roll button or shake your device to start rolling the dice. If you need to hold some of the dice, just tap on them and they will "freeze" while you keep rolling the rest. Beautiful background color...

Hi,
Tanks a lot for your help. Today I can’t even hear any sound from Text to speech (no English also). Do you have to download a file on my smartphone ? How ? Or where should I change the settings on it ? My smartphone is set in French but I can find easily if you tell me which english setting I have to change.
I tried also with Kodular Companion on PC with BlueStacks and I have the same problem.
You are very nice to help and I hope I will find a solution

Hi guys
I finally found the solution. In my smartphone settings the “text to speech” was not connected to Google Text to speech but to another one. Now it works perfectly

So if somebody experience the same issue, go to setting, choose “accessibility”, “reader”, “setting” and then “text to speech”. Click on Engine and set the Google text to speech.
Thanks a lot a game for your time Felipe and Italo