Camera - Error 201, the camera did not return an image / missing Pictures folder

To avoid that the following error message occurs with the Camera component:
"Error 201, the camera did not return an image” or you don’t get an OK button after taking a picture,
because the folder “Pictures” does not exist (has been deleted by you or your users),
use these blocks: 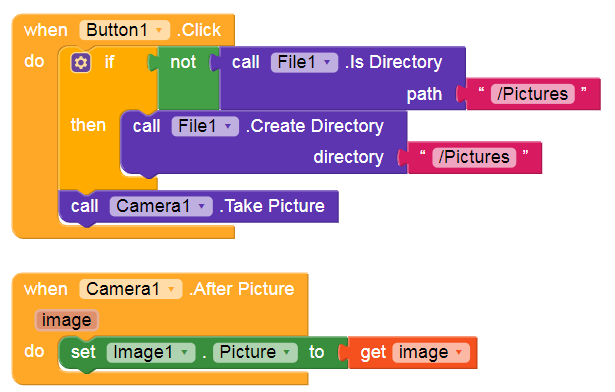 Note: Since Android 5, this folder is no longer automatically created by the camera component.
The folder is still created with Android 4.3.

@Kodular I think this folder should be created automatically on all Android versions.

I did some more tests on serveral devices & Android versions:

On all devices the Pictures folder is not created .

"Error 201, the camera did not return an image" on Samsung device, Android 8.0

I tested it now also on these devices: Galaxy Note 8 (Android 9) and there is no OK button after taking a picture Xiaomi Redmi Note 5 (Android 9) there is an OK button, but after pressing it I get no image Galaxy Note 3 (Android 5) I get the same...

Should be fixed in next release.
If the directory doesnt exist it will be created automatically.

Importantly, it is necessary to use the smartphone’s native camera, if using another camera app it may not work. I tested 2 app didn’t work, but one did.