I think an official In App Update tutorial can be helpful for us as we can test this only in production! What do you say?

Sure I don’t know why no one replies here!

I think their is not much to explain. Look to the different blocks, because the description is sometimes enough. 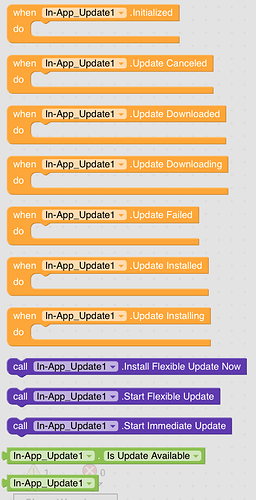 You can do this (it’s only an example. I don’t test it and don’t know if this will be work!):

Is flexible update blocks for updating the app in Background? And the other one updates app in foreground, allowing users not to use the app until update complete?

Don’t know that exatly… Maybe any @ProKoders can help

@Diego Thank you very much for the aia.

Just one more question, What is the difference between Flexible Update and Immediate Update?

Flexible is a recommended update
Immediate is a forced update

The difference is that the dialog in immediate is full-screen, while the flexible one is just a dialog where you can see the background

And the immediate update is also an all-in-one block, as it’s downloaded, installed and relaunched with the same block

Hi @kingbhishma9 Go to Account (At top right) » Settings » Turn on Experimental option in order to see this component.

I don’t think if this is what I wanted.
I wish I could have found the simple blocks to be like this of internet error

There is no need to add buttons for update checks, I think if you could have shown the blocks that on the first screen the check for update should be checked but if the version code is not equal then open another screen to install or call the new Activity Starter with url link to update the App on play store or elsewhere.

But if the version code is the same then call for main screen to continue using the app.

Why can’t some understand what i mean? 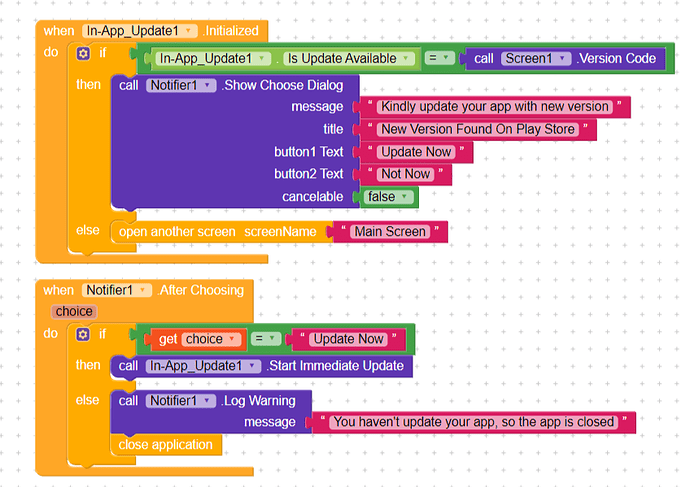 So, as long as we need users to get popup updates if found in the play store, i claim it again that, “there is no need to put a lot of buttons on the screen to check for updates.”

Thanks in advance @Diego can you do something for this?

The “Is Update Available” will return a boolean, not an integer
If what you want is notify to force the user to manually update it from Play Store, just do it like this

Can you show blocks please.

The “Is Update Available” will return a boolean, not an integer
If what you want is notify to force the user to manually update it from Play Store, just do it like this

Hello @Diego can the blocks be like this?
Will these blocks work?

Yes, that is perfect!