Problems after importing a aia file from Thunkable classic

I imported an aia file of an app that I had developed with Thunkable Classic into Kodular.
The import was successful, and I was also able to download the Apk of my apps with Kodular, but my problem is that it only loads me the main screen but when I try to open other screens it give me error.
Error is: Screen not found (see allegated screenshot).
I ask if someone can please help me thanks!

Can you provide me the aia??

BOLOGNA_MEDIEVALE.aia (5.4 MB)
Certainly thanks for your help I am attaching it to you

Kodular an thunkable hasn’t got the same components, so it’s normal that some components and blocks don’t work well after you import it between those platforms

Thanks for your advice, yes I checked and all the screen names are correct, then to be sure I rewrote the screen names by reconnecting them to the home buttons again but they still don’t work.

Thank you for your answer! I certainly knew about the differences between Kodular and Thunkable (e.g. floating buttons are not supported in Kodular). My problem is that I can’t edit the app on Kodular, the arrangements seem to be stuck, the screens don’t open, etc … this app I created with Thunkable Classic is present on the play store and has had + 5000 downloads and 94 positive reviews, but due to the API 29 which requires Google from November 2020 I will no longer be able to update it with Thunkable and to develop it took me months and I would not want to lose all this work.I attach, in case it should be useful apk of how the app should be. Thanks everyone for the help

I used unchive to look at your aia. You have 20 screens but they all look very much alike blockwise. 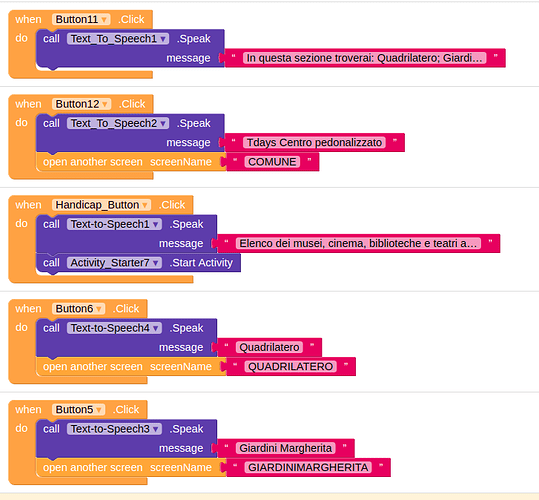 Maybe this is a good moment to rethink your app and maybe redesign it so you use less screens. You could also try to remove the fab component using thunkable classic and then see if importing goes better. If not you will have to make it in Kodular from the ground up using the blocks from Thunkable. Again you can use unchive to easily look at your blocks.

I used unchive to look at your aia

I didn’t know that is exist! I have tried it now and it’s amazing

Thanks Peter for your advice, very helpful and professional. Yes, you are right, my app has many screens and when I used thunkable classic it always warned me of this problem. I tried to delete the screens from Kodular, but I can’t select them, I see them but when I try to open them they don’t open and I can’t remove them, only works the screen1 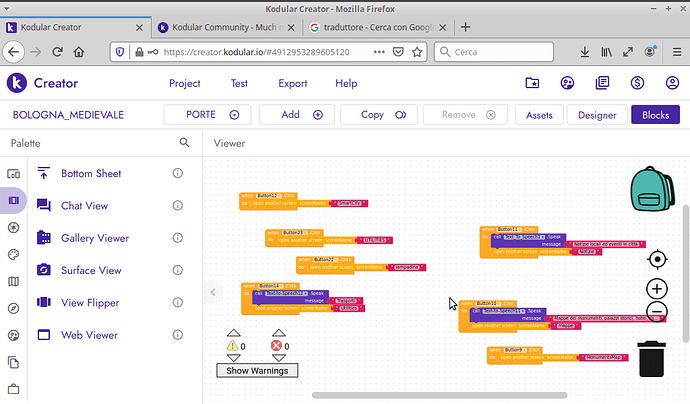 Here you have a working one

Btw, don’t do this, you had two identical screens 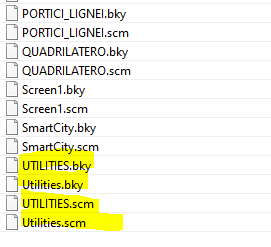 Thank you so much Boban! Everything now works with your aia file!
ps. i have the same problem with another App, imported from Thunkable Classic, the aia file has the same problem, if you could help me.
Thank you

I also noticed that all icons are shifted to the left on all screens. I hope in the coming days to be able to solve this problem too.

I hope in the coming days to be able to solve this problem too.

With a little hard work, you will be able to do it

Btw, it seems that something went wrong, can you reupload the file and I will try to do that tomorrow…

Thank you very much Boban!
This is the file aia
Good Work!

Maybe you can make a guide in which you explain what magic you sometimes do to make aia’s work?