Firebase still not working, the app close as in the previous version

It’s not really a bug, but you can look into it:

The Dates not visible correctly with the dark theme, the color of the date is also dark

The table arrangement is visible in designer and in live test, but when install the app, is invisible. Horizontal arrangement work properly.

I have 4 buttons with dynamic text, the text change with each new question. I set a width of 180 pixels, but when the app is running, the buttons don’t have a defined width, they work like width = Automatic.

This occur when the app is installed, in live test, they work good.

I can’t set the text labels in center, they be left for default and can’t be changed.

I test alone, in arrangements, clickable and not clickable.

ok, i found that the window for select the label text alignment appear, but not where have to be. 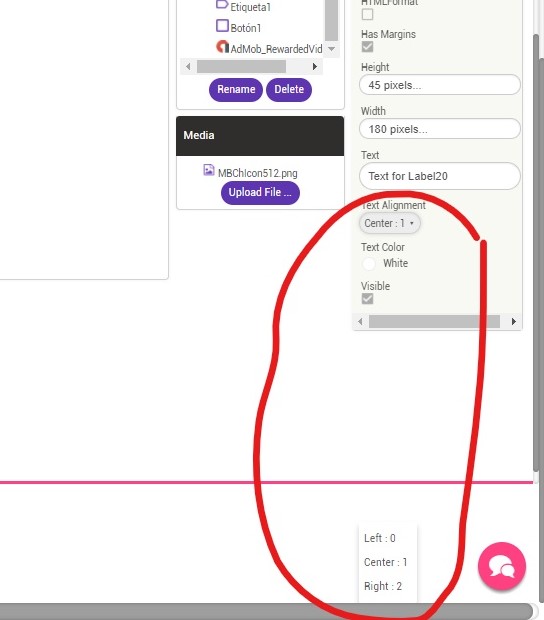 The menu when clicking a media asset is not visible in Chrome. It is visible in Firefox.
Also the famous scrollbar returns as you can see.

In Firefox it opens a block screen like this. Off center.

I can’t seem to reproduce it at the moment but one of my projects opened with all the procedures collapsed and on top of each other.

This was in the beginning een AI project. But it never opened with the blocks collapsed with the previous version of Makeroid.

Please send a apk.
We have testet firebase before the new release.

Does the same happen to you when you try a table layout in any other builder?
We dont have changed anything on the code for it.

The firebase is working perfectly but not in the live testing mode.

The problem is with the buttons shape, my buttons are rounded. If i let the shape by default, they appear perfectly in the table layout, and the width = 180, work perfectly too. I try in 2 different projects with the same results.

Height and width has unwanted Box

@vishwasadiga you are setting every single label element to have a checkbox image, you may want to use .gwt-CheckBox label { in Ya.css file

Reported by @kkashi01 on the dev forum: In the latest version of Chrome (Chrome 61) the dropdowns for properties in the designer...

This is also visible in Makeroid.