Preview in designer screen is not in the middle

Hello guys.
I have a small problem.
In the preview of the app in the designer screen.
If i use a label and put it into a arrangement and set this arrangement and the label text to center, i dont see the text. If there are elements which are on the right side of the arrangemnt, you cannot see them. In the apk on the phone, all is ok and looks fine, but the designer screen makes troubles.
I tried to let the preview look like a tablet but this helps only a small bit. 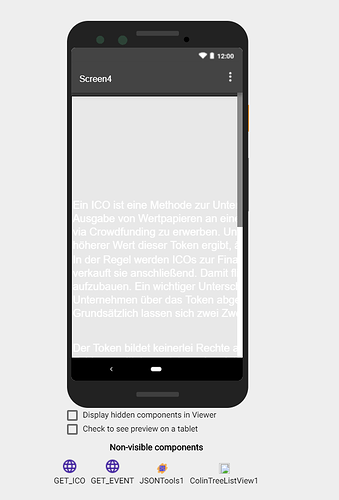 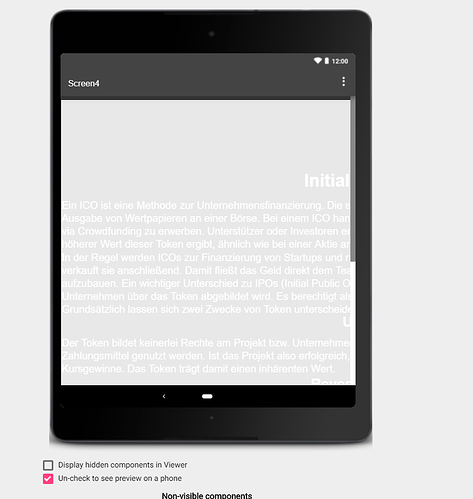 There you can see the different. Not really much.
In a other screen i have made a arrangemnt with 4 buttons and the buttons on the right side, you cant see them.

Is there a possibility whch i dont know to solve that issue.

I want to move a button from that element to another. but i cannot do that bc i cannot see the element

i have to change a lot of heights before i can pick up a hidden item from the screen which is only hidden in the preview not in the app.

Nobody have a idea. Reallly nice guys, there we can see how people are in that time we live. You people want help and they want a answer in the same moment atfter they asked. But if other people need help they dont give a answer, if they know ther answer or not, makes no sense for them.

Thank you guys i will help only a few members which helped me in the past and new members, which can write a normal question without the words: Fast, now and admob or ads.

Send code
Maybe I can solve your problem

If you had provided an aia file, I would have tried to help you.
Reading all you explanation and trying to replicate your issue is not going to be simple.

i dont send you my work.(project) this problem has all other user like you too. You dont need my project for that,

sorry thi swas on the wrong person the answer

I cannot send my aia bc my project has a lot of work in it and it was too easy to make a own app out of this and publish it on play store or so.

i can try to make a small app with the same error.

i can try to make a small app with the same error.

That will be good, because I’m unable to replicate your issue

this is a small sample.

I’ll take a closer look on your aia as soon as i get home from work.

Don’t know if I will be very helpful to this but I well try.

Because it is only representation of how it can look and there is a big difference between the designer and how it looks on the companion while you are testing, on designer components occupy more space than they need.

In your example,
you set buttons width to 15% but the designer might use 20%+
space component, what it looks like it occupies 25px+ in designer but in blocks it repports 0 and thereof invisible in companion 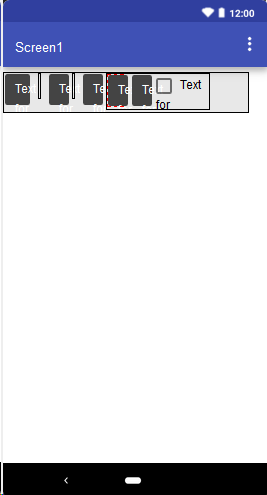 and in blocks adjust to proper size

ok thanks for your answer. i thought to have different things in in designer and after in initialze could make errors. i know that woork but i didnt di that in the past. ATM i work with make visible and unvisble

Hi @plang58,
Why don’t you try changing orientation to landscape while you are editing in Designer mode and at the time of building the app change the Orientation back to default one. Landscape orientation will give you more space than portrait.
Thanks