Unable to jump between screens!

I have created a quiz app but since the last update, I can not jump between different screens. The companion and the installed apk are crashing. But the creator does not show any errors. I have asked the community and they said that it is an error of the new version. The installed app is showing the tipical notifier that the app has crashed and is asking wheter I want to send a bug report.

I do not know how to reproduce the bug because my programm is very complicated. I have checked it a long time ( a few hours, 5 or 6) for any logical errors, but I could not change the situation.

When I click on a button it should change between one screen and another. 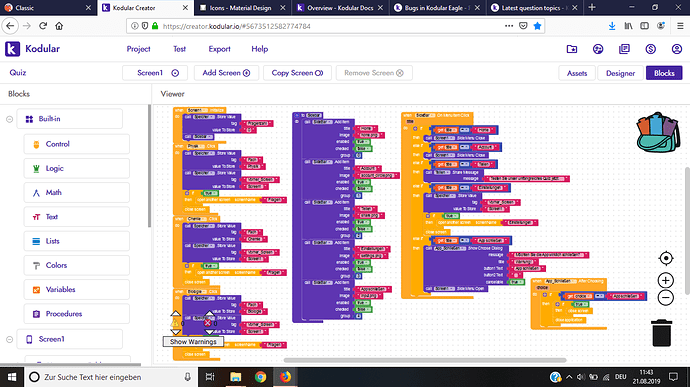 Did you read about this error, ArchTaskExecutor not found? I think this is related. Look at the link. It should be fixed in the next update.

I tried his solution (removing close-blocks) but the problem remains/stays (do not know how to use stay/remain)!

It should be fixed in the next update.

Did you read this?

Yes, but I thought that it is related to the ArchTaskExecutor…

Bro if you use close screen block then you will get this error. …

Even without that block the companion crashed…

I tried without the close blocks but the result was the same… Thats why I had opened that bug report.

Can you please provide aia then we can help you…

I will wait at first… Like the developers and others said…

They say it gonna fixed in kodular eagle 1.4.1? Not sure when? They dont say any timeframe yet

I got news they are going to update on Friday

The problem is the same (after 1.4.1) but I have rearranged and changed the app. But now, the Kodular companion crashes sometimes, sometimes he jumps to the other screen and instantly back…

4 posts were split to a new topic: Erro while jumping screens

I have imported from Thunakble but had changed all errors… And now I have only 5 button, Tiny DB, Notifier left from Thunkable… All other I have changed…

Thats the problem with all builders. They are much to different. You can not expect when you switch it will work without a problem. So this is not the fault or error of Kodular. Maybe start a new.

At the beginning it worked, thats the point. After one or two days with Kodular it crashed…

Try to replace the notifier. Maybe that helps. Blocks change often and the notifier of Kodular is much more powerful.

It is a bug, I have created a complete new project, only to figure out what is the problem. I have two screens on which is exactly and only one button. Every button lets you jump, when clicked on, to the other screen.
Here the project:
Test.aia (2.6 KB)
Here Live Test: SVID_20190825_221404_1.mp4 (1.2 MB)
At first, all works right but then it is not possible to change the screen!